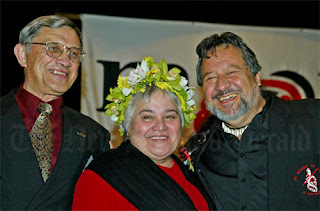 Whatarangi Winiata, Tariana Turia and Pita Sharples
In the previous post I examined what I considered were some of the policy successes of the Maori Party. I reinforced the idea that the majority of their policy gains were purely symbolic, although somewhat powerful, they did not translate into tangible benefits for ordinary Maori. In this post I will detail where I think the MP has failed.

The MP failures have been numerous. There have been the small yet largely irrelevant defeats such as the debacle surrounding the Rugby World Cup broadcasting rights, Maori seats on the Supercity (arguably this was an important battle) and the Governments bad faith actions surrounding the Tuhoe settlement. And there have been larger failures. In my opinion their most significant failures have come in the form of what they have voted for. By voting for a bill you are endorsing its aims and its content. No one cares if you disagree with it but are compelled to vote for it. When you vote for a bill you sanction it and you are associated with it.

There are four laws I think the MP should have never supported – the Emissions Trading Scheme (ETS), the governments tax changes, the changes to ACC and the 90 day right to sack bill.

The ETS presented NZ with a golden opportunity to lead the world and justify our green credentials. We missed that opportunity. Instead we were given, due to the support of the MP, a weak, backwards and potentially economically crippling piece of legislation. The ETS epitomised everything that is wrong with law making under a National government. It was short sighted, visionless, rushed and inequitable. The legislation is so flawed in that it will dump huge costs on households whilst showering our biggest polluters with subsidies – or exempting them altogether. Households will face an increase in prices across the economy including power and petrol costs. Maori households will be hit hard. Voting for a piece of legislation that will offload considerable costs onto Maori households and lead to perverse environmental outcomes due to warped incentives is anathema to kaitiakitanga and is not an example of manaaki on the part of the MP. Pita Sharples admitted that the MP were voting for the ETS on the grounds that it would avoid short term suffering and lead to benefits for iwi. The later reason is used frequently by the MP to rationalise their actions – the “it will benefit iwi” excuse is a cop out. The MP should vote according to what is best for Maori in the real world. Unfortunately, symbolic wins (see the previous post) are only worth so much when you live from meal to meal.

Voting for the increase in GST was another blow for Maori households already struggling in the recession and will do nothing to help most Maori as the increased tax revenue is been used to finance tax changes that will mainly benefit those on high incomes. This was just another cost increase the MP were willing to inflict upon Maori. Hone Harawira was the only member (with the backbone some would say) to vote against the changes on the grounds they will hurt the poor (especially Maori).

The changes to ACC that the MP voted for will also affect Maori heavily. An increase in levies has led to further increases in the price of essential commodities such as petrol. Combine this with the ETS and the increase in GST that the MP voted for and a very ugly picture begins to emerge. If it were not such an absurd suggestion one would begin to believe that the MP actually wants to increase the cost of living for Maori. Entitlements were also affected. I cannot find a reliable source but I imagine that their rationale for voting for changes is that iwi will have the opportunity to cash in on ACC contracts and the like via the governments privatisation agenda.

The MP has also voted, on more than one occasion, to weaken work rights. The most serious of those in my opinions is their vote for the 90 right to sack law. This law will, again, affect poor Maori – those in the working class and especially those in entry level jobs.

Another more secondary failure comes in the form of the MP’s silence on a number of important issues concerning Maori. Including drilling on the East Coast and welfare changes. This is very concerning and perhaps shows a disconnection between Maori on the ground, and I hesitate to use this word, and the ‘Maori elite’ in the form of the MP and iwi leadership.

Therefore, I believe, the MP has caused a considerable amount of damage to Maori households. The increase in costs Maori households are facing due to the ETS, tax changes and increases in ACC levies will encourage the growth of the Maori “underclass”. Couple this with weakened work rights and it’s a recipe for instability and a decline in the quality of life of Maori. Although these laws were not created by the MP they have adopted the policies by voting for them. It may seem unfair to attack the MP over these policies, given they are National Party policies, but their support has been crucial. They could have at least mitigated the effects on Maori by refusing to vote for the ETS for example. They had the chance but sadly they failed.

Unlike the policies I detailed in the previous post the policies mentioned in this post are tangible and paint a picture of a somewhat irrational and conservative party. One that does not appear to be doing the best by Maori. At the end of the day no amount of symbolism will pay for rent, feed, clothe and keep the children warm. Symbolism will not create jobs.

However, I certainly do not think these failures will spell the end of the MP. I actually think, if they can manage the F&S issue well, that they will make considerable electoral gains. Hone will without doubt retain his seat. He’s something of a minor celebrity up north. Pita will also cruise to victory. He has, for a number of decades, been one of the most prominent members of the Maori community in Auckland and is held in high regard by many. Te Ururoa will also have a rather easy run to victory. He is vastly more popular than Labour’s Mita Ririnui – Te Ururoa has a strong following in Rotorua. Tariana will also most certainly roll whoever Labour puts in front of her. Even though I do not know her electorate as well as I do the others I am fairly confident in that prediction. Rahui may have a close fight to retain her seat if Labour puts forward a credible candidate with the backing of iwi. Rahui’s support for the new F&S bill will have lowered her in the eyes of Ngai Tahu who oppose the bill. Parekura has vast connections on the East Coast and is well liked up the Coast. By virtue of his whakapapa he will more than likely scrap through for another term. Nanaia is in a similar position. Her connection to the kingitanga will guarantee the support of tribal Maori. With that been said if the MP puts up candidates in the two former electorates of the calibre of Derek Fox and Angela Greensill then they will have a very real chance of seizing all seven Maori seats.

To conclude, it may seem like I do not approve of the MP’s unlikely coalition with National. I do. I just think the MP has failed to manage the relationship as best they could and as a result of that poor management they have done considerable damage to the lives of many Maori. But that aside, it was a brilliant tactical move on the part of the MP – unexpected and very, very clever. Make no mistake; the gains the MP has made are only possible because they are happening under a National Government. Were Labour in power National would be howling “reverse racism” and fuelling racist sentiment and Labour would have almost certainly crumbled under the pressure. The coalition also followed one of the worst few years in race relations in New Zealand’s history (Orewa, F&S etc…) and was a powerful sign of maturity in our politics.

Without doubt the MP has transformed the face of New Zealand politics. Maori issues are now in the spotlight and are a permanent part of the political landscape. This sort of progress is invaluable and has us taken hundreds of years.

My hope is that, in future, the MP will really live by their motto:

The current government has an incredibly well managed image. Yet, they do not appear to possess the political management skills to complement this image. By political management I mean campaign management, strategic management (e.g. choosing what policies to implement and when) and managing ministers and caucus members. The current government’s negative press has, for the most part, revolved around failures of political management.
In terms campaign mismanagement there was the Mt Albert byelection disaster -a template on how not to run a campaign (that been said the Mana byelection was a template on how to run a campaign).
Poor political management on a policy level does not necessarily equate to unpopular policy rather policy that came about at the wrong time, for the wrong reasons and in the wrong form. In politics you can justify almost anything if the timing is right (the political climate is right), the reasons seem genuine and there are some parts, if only one or two, that the electorate considers reasonable.
National Standards is an example of policy that was pushed through at the wrong time and in the wrong form. There was no great appetite amongst the electorate for change in the education system, although the electorate appreciated the government’s intentions, and the education sector believed that the policy took the wrong form. If the government had been willing to approach implementation of the policy differently they probably could have come away with a win. There were parts of National Standards many parents seemed supportive of. Like having a single measure of achievement as opposed to a range of different measures. So the timing was wrong, the reasons and the sales pitch was poor. Political mismanagement 101.
Some of the failures of political management on a personal level include the Bill English housing rort, Pansy Wong’s abuse of travel perks, the Phil Heatley saga, the stupid Richard Worth affair and now the David Carter controversy. The PM should have a close finger on all his ministers. His hands off approach has led to more than a few ministers been caught out for activities that weren’t legit. These failures, on the part of the PM, will probably be the most damaging in the long run. They feed the perception that this government is “loose” with standards of behaviour. The opposition can easily build a narrative around this idea and I imagine the media would be fairly receptive given it is an easy angle. Policy is much harder to pin down because it is such a subjective thing whereas most people can agree using taxpayer money for personal purposes is wrong.
Posted by Morgan Godfery at 3:17 PM No comments: