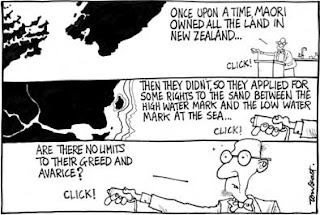 The Marine and Coastal Area Bill is deeply flawed. The Bill is riddled with drafting errors and ultimately will not restore mana whenua. So naturally I was disappointed to see the Bill returned without amendment.
I half expected Te Ururoa to adopt a degree of independence from the Nats on this select committee. Sadly, he, and his mates, had formed a common intention. The question I find most intriguing is when did the two parties decide they were going to use their majority to return the bill unchanged? I am merely speculating but I think it was done a number of months ago, perhaps when the select committee commenced. I would also postulate that the complaint against Hone Harawira was an attempt to silence him before the bill was returned to the House. I think Te Ururoa and the leadership did not think it likely that Hone would hold on for so long. I imagine they thought he would quickly shoot himself in the foot and the matter would be dealt with relatively swiftly. As we know the opposite has happened and Hone is beating them at their own game. Given that Hone was not expelled before the bill was due to be returned the leadership needed another way to silence him – suspension from caucus. Hone’s behaviour over Waitangi weekend provided an excellent excuse for doing so. Now he cannot speak out on behalf of The Maori Party, he is something of a castaway. But that’s enough speculating – back to the select committee.
As a select committee member Te Ururoa’s role is to facilitate public scrutiny and consultation. Furthermore, Te Ururoa, as a self proclaimed Maori representative, has a responsibility to act as an agent for Maori interests. I expect him to exercise his own independent judgement but ultimately it is more important that he act as a conduit for Maori concerns. However, Te Ururoa has put political considerations ahead of his moral and democratic responsibilities.
The MCA bill is not an elite concern. The implications of implementation will be far-reaching. The bill affects all Maori and all New Zealanders. Therefore, it was almost an imperative that the Maori Affairs Select Committee took into account the views of submitters and reflected that in their report. What the committee has shown is that policy formulation is an insider’s job. Influence over policy is only open to members of government and those with institutionalised access to it, for example the Iwi Leaders Group. This theme is becoming all too common across Maori Party policy. Access and consequently influence is granted only to the elite (iwi leaders) while ordinary Maori are excluded (I have touched on the subject of the Iwi Leaders Group limiting Maori political participation here).
It cannot be said enough that what Te Ururoa has done is nothing short of disgraceful. Annette Sykes sees it as a betrayal and I agree. It is disappointing that Te Ururoa has not rationalised his actions nor made any attempt at all to at least defend what he has done. It makes you wonder if he is not reacting to the situation is he even anticipating it?
The party must surely be doomed. It has no money, it is losing talent and in due course will probably lose members. Surely Moana Jackson, a prominent critic and conscious within the party, will leave. It is difficult to say if many will follow but I would not rule out the possibility of mass exodus. The Maori Party is descending down a corridor to destruction. Only they can save themselves, although I doubt they have the self awareness and foresight required to do so.
Posted by Morgan Godfery at 3:27 PM